Today, we have organized a Congressional Talk with Dr. Gonul Tol, a specialist on Turkey at the Middle East Institute in the Rayburn House Office Building. Dr. Tol talked on the topic: “Turkey and the Arab Spring” which has drawn attention of many Congressional staffers who have attended to this instructive talk. The Turkic American Alliance is organizing Congressional Talk Series in order to inform the Members of the Congress and their staffers from the first hand sources. Dr. Gonul Tol’s talk also was such an informative talk.

Dr. Gonul Tol discussed many concerning issues such as the relationship between Turkey and Israel. She stated that recent events between the two countries have inflicted damage to each other. However, Dr. Tol believes that even though harm has been done, both nations should put aside their problems and proceed with peace talks. Her main point regarding this topic was that both countries need to be lenient and give way to dialogue and diplomacy in order to secure a better friendship.

Furthermore, Dr. Gonul Tol mentioned that Turkey more engaged in the Middle East than compared to 1990s by investing both economically and politically in the region. For example, Turkey lifted visa requirements with Syria, Lebanon, and Yemen. It signed energy deals with Iran. Turkish construction companies received government contracts in Libya, Egypt, Syria, and Iraq. For instance, there are around 300 Turkish companies in Northern Iraq. And thus, Turkey has used these networks as leverage and has played a mediator role in regional conflicts.

International debate on whether Turkey was turning its back on the West. Fraying relations with Israel after the Flotilla crisis, Ankara’s dealignment on the Iranian nuclear question led observers to conclude that Turkey was shifting the axis of its traditionally Western foreign policy.

The Arab Spring caught everyone off guard and reframed the discussion on Turkey with attention focused on whether Turkey can serve as a model for the countries of the region and a coordinated Turkey-Western response is possible.

With a short delay to the events in Tunisia and Egypt, Turkish Prime Minister Recep Tayip Erdogan was the first international leader to publicly ask Mubarak to step down. But Turkey was initially quite about Libya. It was against international intervention.

As events have unfolded, things changed. Turkey realized that the network of relations it had built since 2002 was undermined by popular movements which challenged Qaddafi in Libya and Assad in Syria. Turkey had substantial economic interests in the Arab world. Thus, Ankara finally realized that the Arab Spring might stabilize the region but might also engulf it in chaos. Ankara has worried that Iran might come out of this stronger and challenge Turkey’s interests.

This realization forced Turkey into policy reversals. For example, Turkey coordinated with Europe and the US on Syria. Turkey is cooperating with the West on Libya. It supported the opposition. For example, Turkey hosted Syrian opposition in June, and Libyan National Transitional Council based in Benghazi in July. Turkey is establishing ties with different groups in Egypt. So, we see a healthy maturation of Turkish foreign policy.

But there are two missing pieces in this picture: Iran and Israel. Recent tensions with Israel have ruled out Turkey’s role as a facilitator of the peace process. Turkey criticizes the stance of the Israeli government but will ultimately have to acknowledge that a solution to Israel’s security problems is key to the stabilization of the region.

Turkey has been less outspoken about the need for political change in Iran than other Western countries. It still supports a policy of engagement with Iran but at the same time Turkey realizes that Iran may take advantage of the regional volatility to increase its influence.

The Arab Spring provided both opportunities and challenges for Turkey. Turkish relationship with the US has improved as a result of the Arab Spring. The two countries see eye to eye regarding regional dynamics. Western support for the regimes of the Middle East has weakened Western standing in the region. So Turkey, a country that has historical, cultural and religious ties to the region, has more leverage than the Western powers. In that sense Turkey has become an asset for the West and for the people of the Middle East.

But the Arab spring also challenged Turkey because of Turkey’s investment and its ties to the regimes. So far Turkish foreign policy has been dynamic enough to respond to the new conditions on the ground but there is still chaos, too many unknowns so it is not easy to predict the future course of Turkish foreign policy.

In addition, the specialist, Dr. Gonul Tol discussed current leadership roles and the public opinion about current leaders in the Middle East. For example, she mentioned about Turkish Prime Minister Recep Tayip Erdogan’s suggestion to Arab leaders that considers reforms which should meet to the people’s demand. Dr. Tol explained that publicly many Arab nations are pressuring their leaders with more emphasis after witnessing Prime Minister Erdogan’s actions toward Israel. According to Dr. Tol, Arab people expect more from their leaders with regards to the Flotilla incidents and other human rights violations.

After a great informative session about the region, questions by our honorable guests were taken regarding the topic. For instance, Dr. Gonul Tol answered a question which asked that should Turkey be more dynamic or more active in the region? Dr. Tol argues that legitimacy becomes the most influential tool now in the region and Turkey has legitimacy because of its shared history, culture and religion with the Arab countries in the region. As a result, Turkey should be more dynamic and active in the democratization of the countries of the Middle East.

Consequently, there were several interesting questions on people to people relations between the Turkish citizens and the people of Middle Eastern countries, on civil society in Turkey, and the perception of the democracy in the region. One of the interesting answers which Dr. Gonul Tol gave was democracy is a tool for making people’s life better, and in this term Turkey could only be contributor for the democratization of the region.

To conclude the event our guests and speaker enjoyed a delicious lunch. 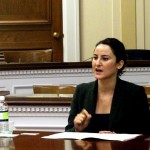 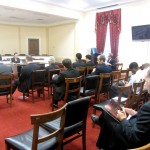 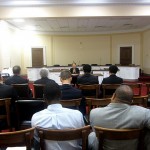