President of Turkic American Alliance, Dr. Faruk Taban attended to a traditional Ramadan dinner which was given at the White House by the United States President Barack Obama on Wednesday evening. President Obama hosted around 140 guests consist of Diplomats from the Embassies in Washington D.C, Representatives of NGOs, elected leaders, religious leaders in the Muslim American community, otherleaders of diverse faiths and some families who suffered on 9/11.

Honorable guests of President Obama entered the White House at 7:30 p.m. and they had fruitful talks among each other in the Blue Room before the dinner. Guests broke their fasting with Madjool date, beverages, water, orange, apple and buttermilk. The whole East Room was reserved for only Evening prayer. Afterward, everybody walked to the State Dining Room. There was a reserved seat for each guest.

President Obama entered the State Dining Room and gave a speech. And then, he sat at a table which families who suffered on 9/11 were sitting and become acquainted and talked with them. After dinner and dessert President Obama walked around all of the tables and acquainted himself with everyone as well as taking pictures with guests.

As President of Turkic American Alliance, Dr. Taban underlined President Barack Obama has a really amiable and warm-blooded personality. He talks with you like a friend. You are not living a stress of talking with the US President. He is sincere and heartedly. Dr. Taban says he introduced Turkic American Alliance to President Obama by introducing himself first with a few words after shaking hands with the President. Subsequently, President Obama took pictures with those people who sat around that table.

Conversations with each other continued even after President Obama left the Room that consist of privileged group of people. Dr. Taban said, he had a fruitful conversations with Huma Abedin,deputy chief of staff and aide to US Secretary of State Hillary Clinton, and Rashad Hussain, U.S. Special Envoy to the Organization of the Islamic Conference (OIC). He also mentioned he had found an opportunity to meet with several Ambassadors and introduce them to the Turkic American Alliance and their work. Among those were Ambassador of Russia, Uzbekistan, Pakistan, Indonesia, Iraq, Togo, Tunus, and South Africa. 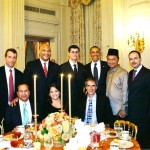 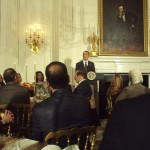 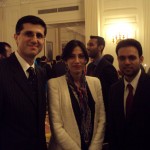