Trending
You are at:Home»Front Page»MAFTAA and ATFA’s International Language and Culture Festival
By admin on May 13, 2013 Front Page, Turkic Festivals, Turkish Olympiads, Uncategorized

Festival attracted nearly 2000 people from different states such as North Carolina, Virginia, and Maryland. Nearly 40 participants of the festival performed their talents in three distinctive fields: poetry, song, and folk dancing. There were distinguished guests including Namik Tan, Ambassador of the Republic of Turkey to the US, his spouse Mrs. Fugen Tan, Huseyin Avni Cos, Governor of Adana, Turkey, and Chap Peterson, Virginia State Senator.

There were members of the jury from various organizations and talented musicians. Dr. Faruk Taban, President of the Turkic American Alliance, was also among the members of jury. MAFTAA’s Executive Director Mahmut Yeter gave an opening speech of the International Language and Culture Festival and mentioned about the importance of the event.

Then, honored guests of the festival were invited to the stage to congratulate and salute all participants, who despite their young age and diverse ethnic backgrounds were sharing the same civic and cultural values.

This year’s event was headlined as a Festival “Towards the Global Peace” and that is why this year organizers managed to diversify participants and encouraged more traditional and cultural shows like folk songs and dances.

Winners of the song and poetry category Ingrid Chien and Cardo Grand, who performed “Günün Birinde” and “Turnam Mardine Gidersen” respectively, were granted a chance to attend Grand Final in Turkey on June 1-16. 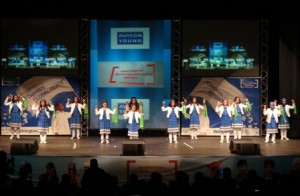 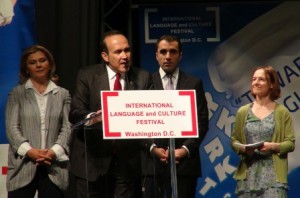