Trending
You are at:Home»Events»Commemoration of the 10th Anniversary of 9/11 “Appreciation of Heroes”
By admin on September 9, 2011 Events, Front Page, Panels and Conferences

We, as the Turkic American Alliance and the Rumi Forum, one of our component organizations have organized a panel discussion to commemorate the 10th Anniversary of 9/11 with the topic “Appreciation of Heroes”. Our speakers were Dr. Ori Z. Soltes, professor at Georgetown University, and Mr. Abdi Farah from the Department of Homeland Security-Civil Rights and Civil Liberties Office.

First of all, Dr. Ori Soltes explained what the term “hero” meant by talking about how this concept originated in the Western world with ancient time stories. As Dr. Soltes refers, there were two features of being a hero; one of them is to have an ability to do something which others cannot do, and another one is selfishness which means you at the end of the day whatever you have done is for yourself.

However, according to Dr. Soltes there is a third feature of becoming a “hero”; namely he gave an example from the Rome Empire by underlining that Romans considered community above the individual and therefore, you will be a hero when you could sacrifice for the community or in other words for others. In brief, Dr Soltes draws attention to the importance of being connected with others, not just with oneself in this context.

Afterward, Dr. Ori Soltes mentioned different meanings of the word hero in different periods of time in history. For example, he said when Islam came in the 6th century there was a word ”Ummah” which means people or community and you could be a hero when you sacrifice for Ummah. However, arrival of this concept into our era is quite different. Dr. Soltes says a “hero” is someone not who worries about himself but who worries about the community; people are defined as a hero by the things they do for others rather than themselves.

By saying for an event like 9/11 ten years ago Dr. Soltes continued to his words we think on the one hand, of victimized and victims, and we have to think on the other hand, both of those victims and non-victims; who were victimized or not victimized, because they did what they needed to do not for themselves but for others. For example he mentioned members of the Police and Fire departments came to save lives of others even though they were not on duty. Some of those members perished as some of them not, but the issue is not to be perished, the issue is to offer yourself for others -Dr. Soltes said. He concluded his words by underlining that we remember those people who sacrificed for us by having these kind of events and therefore, expressed his gratitude to the Turkic American Alliance.

Furthermore, Mr. Abdi Farah discussed the Department of Homeland Security (DHS) and its work throughout the nation. He mentioned it was an honor to be invited to speak about the 9/11 as an official of the DHS, because the department itself was born out of the events of 9/11. Mr. Farah underlined the importance of working with the communities in order to make sure security among the community is at its highest. Therefore, as an official of the Civil Rights and Civil Liberties Office of the DHS he reiterated that we are among the people in order to provide them security.

Mr. Abdi Farah discussed the Department’s function by saying, what has happened on September 11th 2001 will never happen again, because the national securiy infrastructure is more stronger than it was ten years ago. He says about heroism that we are now with every single American with an heroic action being prepared to make sure security of every places of our country.

In addition, there was a question and answer section.

By finding an opportunity in here, we, as Turkic American Alliance express our deepest sympathies and sorrow for the 9/11 victims and their families. We condemn the incidents, which are against all human and Islamic norms, in the strongest terms. We believe that all Muslims and non-Muslims ought to be united against all those who terrorize the innocent people and plant seeds of hatred in the community. 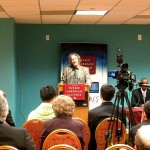 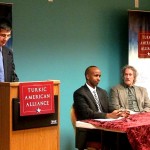 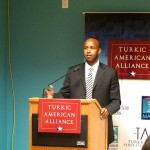