A breathtaking closing ceremony at the Ataturk Olympic Stadium wrapped up the 11th International Turkish Olympıad ın Istanbul on June 16.

Olympic stadium that normally has a capacity of 80,000 people was equipped with additional seats for 50,000 more people and nearly 120,000 people watched the ceremony on giant screens set outside the stadium. Thus, more than 250,000 people attended the event. Students from 140 countries participated in this 16-day Olympiad, which is the first of its kind. International students fascinated local audiences with nearly 100 stages in more than 50 cities across Turkey.

Prime Minister of Turkey Recep Tayip Erdogan was one of the many high-profile guests. PM Erdogan gave a speech during the closing ceremony, which coincided with International Father’s Day, and on this special day some of the participants even had a chance to congratulate and give him a Father’s Day present. On his behalf PM thanked organizers and participants for making that day special to all people of Turkey and emphasized the importance of this event to represent real image of Turkey and Turkish    citizens regarding the last days’ events happening in Istanbul.

“You [Turkish Olympiad students] showed us beauties amid so much ugliness during a two-week period. There have been two images that were completely opposed for three weeks in Turkey, ” said PM Erdogan. “There were Molotov cocktails and stones in one image while there were poems, songs and the Turkish language [in the other]. There were violence, rage and hatred in one image, while there were peace and brotherhood in the other. There were intolerance and ungratefulness in one image, while there was love in the other. Everyone should know this: The real image of Turkey is this [pointing to the spectators], this is the real picture of Turkey,” he added.

Among others were Ministers Hayati Yazici, Egemen Bagis, Suat Kilic, Istanbul Mayor Kadir Topbas, former soccer-star and current member of Turkish Parliament Hakan Sukur, and many other prominent Turkish politicians, businessmen, and artists. Putting aside their political backgrounds, all of them agreed on importance of such events in representing true Turkish culture, praised performances for spreading love, tolerance and respect, thanked for inspiring millions of people around the world to create a better world, and congratulated all teachers who have been working in all corners of the world for working with self-sacrifice to make these magic days come true.

Turkish Foreign Minister Ahmet Davutoglu had something special to say on this fantastic occasion calling it the “most effective” way to promote the real beauty of Turkey, while helping those students to participate at the Olympiad. 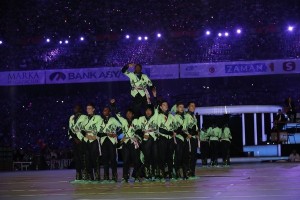 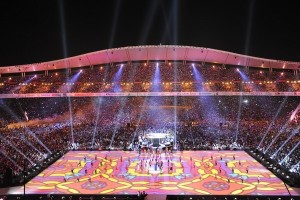