On Monday, September 16th, the Niagara Foundation of the Turkish American Federation of Midwest (TAFM) hosted its 8th annual Niagara Peace and Dialogue Awards. These awards recognize individuals and organizations in the Chicago community that have demonstrated a strong commitment to serving their community and maintaining a global mindset.

Founded in 2006, the Peace and Dialogue Awards seeks to encourage leaders in the Chicago community to continue to be forces for positive change; to inspire thoughtful dialogue on the issues facing its community and the world; and to bring together the best and the brightest in the city to work together towards a more peaceful future.

The awards ceremony was held from 6:30pm to 9:00pm at the stunning Cathedral Hall within the University Club of Chicago. The evening’s emcee was Rob Stafford, Anchor at NBC 5 Chicago. The Honorary Chair of the event was Fethullah Gülen, Islamic scholar, preacher, social advocate and honorary president of the Niagara Foundation. Serving as Co-Chair was the honorable Governor of Illinois, Pat Quinn. In a recognition letter written by Governor Quinn to the Niagara Foundation, the Governor described the organization as a “premiere voice for collaboration between Turkey and the United States…by embracing both similarities and differences among the two cultures” in a way that “promotes the spirit of friendship and the implementation of projects that are mutually beneficial to both nations.” 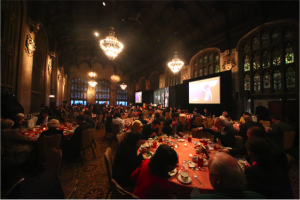 The Niagara Commitment Award was presented to Honorable Anne M. Burke, Illinois Supreme Court Justice and founder of the Special Olympics. As a surprise both to her and the audience, Hon. Burke’s husband, Alderman Ed Burke, introduced her. Hon. Burke spoke of a deeply meaningful encounter she once had with a young Muslim woman. “My jihad is peace,” the young woman had said. Justice Burke recalled the complexity and profound meaning behind those seemingly simple words and described this notion of “waging peace” as a powerful tool for doing good in the world.

The Niagara Community Service Award was presented to the City Club of Chicago and was accepted by Paul Green, Chairman of the City Club of Chicago. Chicago City Clerk Susana Mendoza presented the award. In his acceptance speech, Mr. Green praised the City Club for its longstanding commitment to facilitating a space for public debate. Indicative of City Club’s upstanding reputation and influence, Mr. Green recalled a recent forum that made national news for facilitating policy debate across party lines. At the forum, Congressmen Paul Ryan (R-WI) and Luis Gutierrez (D-IL) came together in the spirit of bipartisanship to debate immigration reform in the United States.

The Fethullah Gülen Award was presented to Dr. Cherif Bassiouni, Emeritus Professor of law at DePaul University School of Law. Ambassador J.D. Bindenagel, a friend and colleague of Dr. Bassiouni, presented him with the award. As Dr. Bassiouni received his award, a slideshow of images was displayed, showcasing Dr. Bassiouni’s remarkable life achievements. Said Dr. Bassiouni, “I am honored to receive an award named after Fethullah Gülen,” whom Dr. Bassiouni lauded as a renaissance man. Bassiouni also spoke of the power of faith and its ability to bridge the gap of knowledge between what we know and what we cannot or do not know.

The Turkic American Alliance congratulates the Niagara Foundation for it remarkable successes and achievements in both Chicago and beyond and looks forward to its future accomplishments in the community.